First off, this is based on the work of Torso Boy, who documented the construction of his glaive on the boards back in 2006-2007. I have not made a glaive myself, but intend to model mine after his ideas. This is my attempt to create a tutorial for such a glaive, from memory.

Caveat: I repeat, I have NOT yet made a glaive, there could be design flaws I cannot foresee without practical experience.


According to the latest CRL standard, a glaive (with extended blades) should be taller than the individual using it. So, in short, it probably needs to be about 6 feet long or longer, depending on how tall you are. If you are 6 feet tall, let√Ę‚ā¨‚ĄĘs just say the visible part of the blades should be 2 feet long or so, and the hilt should be at least 2 feet long. (2 + 2 + 2 = 6). I√Ę‚ā¨‚ĄĘm going to go out on a limb and say the hilt should be absolutely no shorter than 2 feet, and probably closer to the 2.5 feet - 3 feet range. The artwork proportions vary in the comics, but if you look at the action figure version, the hilt length appears to be similar to that of a Maul saber hilt, perhaps longer. Anyway, that√Ę‚ā¨‚ĄĘs as much as I√Ę‚ā¨‚ĄĘm going to debate length at this point.


A glaive consists of a hilt and 2 blades.
Blades can be bade out of any cut-able or shapeable material that will are strong enough to stay rigid when cut into a thin blade-like strip, and not wobble, flex, or bow very much when at least 2 feet long. Suggestions include: plexiglass, just about any found plastic, wood (including floor molding), unsharpened metal (I cannot stress enough that metal blades in any shape or form are a bad idea for traveling and probably not permissible at most conventions), or anything else you think might work. Even foam core might work. Heck, I√Ę‚ā¨‚ĄĘd recommend testing out your glaive with foam core first, before cutting your actual blade material.

This hilt should have:

An inner shaft (made of pvc pipe) (this will hold the blades in place, to be explained later) (Again, based solely on endcap measurement, a √ā¬ĺ inch pipe would be necessary. Note: the base of the blasde will need to be small enough to fit through the endcap opening, or an opening slot will need to be cut. Either way, the inner pipe needs to make contact with the blade in order to keep the blade from rotating.)

2 √Ę‚ā¨Ňďendcaps√Ę‚ā¨¬Ě √Ę‚ā¨‚Äú one on either end of the glaive, made out of PVC Reducing Flush Bushings These cost about 75 cents each. The exact ones Torso Boy used that have an appropriately √Ę‚ā¨Ňďdesigned√Ę‚ā¨¬Ě look to them were available at Home Depot (but not Lowes). The endcaps used were 1-1/4 inch x √ā¬ĺ inch adapters.

Each endcap should have 3-4 raised fins running lengthwise √Ę‚ā¨‚Äú these should be glued to the bushings and be made out of plastic or wood (or anything else that would work). Fin direction varies in the comics, so I guess choose your preference. The majority of the images depict them with the largest part of the fin closest to the blade.

Grips - the handle portion of the hilt should be covered in some form of wrapped or woven grip. Suggestions include black tennis racket tape or just about any form of wrap. Some people have suggested carbon-fiber (?) weave piping (looks like woven metal√Ę‚ā¨¬¶see your local plumbing department). However, I have never seen carbon-fiber weave large enough or long enough to cover a glaive hilt. Not to mention it√Ę‚ā¨‚ĄĘs very expensive. However, I have seen at Target stores a silvery plastic weave placemat in their domestics department that looks very similar to carbon-fiber weave. It only costs $2.99 a placemat, and might be a possible grip source. It will only be carried in stores for up to a year though, so this won√Ę‚ā¨‚ĄĘt be a long-term source. Also, it√Ę‚ā¨‚ĄĘs not large enough or shaped correctly to cover an entire hilt, so it would have to be glued on in pieces, which may or may not work. Anyway, it√Ę‚ā¨‚ĄĘs something I√Ę‚ā¨‚ĄĘm considering testing.

Optional: Metallic detailing, as seen in the Crimson Empire comics √Ę‚ā¨‚Äú Torso Boy made his out of a thin plastic √Ę‚ā¨ŇďFor Sale√Ę‚ā¨¬Ě sign available at most hardware and retail stores. Just draw a pattern on a sheet of paper that resembles the comics, wrap it around your grip (allow a little extra wrap for the grip material), then trace it onto the sign, cut it out, paint it gold or metallic, and glue to your grip. This detailing appeared in several panels of the CE comics, but not every panel. In some panels it was simply an activator button. In others it was more ornate and extended out of the endcap and onto the grip.

Ornamental Pop Rivets √Ę‚ā¨‚Äú the endcaps have a variety of details, ranging from lines and circles to circuitry. One thing Torso By added in addition to the fins were two pop rivets between each fin√Ę‚ā¨¬¶.or between some of them anyway.


2 Socket Head Cap Screws (thumb screws, like those found on a lightsaber to adjust blade length or intensity) (2-pack in the size I am guessing is correct costs $1.39 at Lowes)

2 Pronged Stainless Steel Tee Nuts (3.35 each at Lowes) (Round , unpronged Tee Nuts will also work, and are probably easier to use, but are less √Ę‚ā¨Ňďdecorative√Ę‚ā¨¬Ě in design.)

(These tee nuts and socket head cap screws provide: A) detail to the hilt, making it look mechanical and Star Warsy, and B) function to hold the blades into the hilt, but unscrew allowing the blades to be removed. More to be explained later.)

Optional: you might consider also attaching thumbscrew nuts or cell phone clip knobs (don√Ę‚ā¨‚ĄĘt know what they are actually called) to either end of the hilt, so that you can hang it from your belt like a lightsaber.

Basically, the hilt is made of PVC Pipe. A smaller piece of PVC pipe will be inserted into the hilt to hold the blades in place. This smaller pipe will have notches cut into the ends (similar to Tinker Toys), that the blades will slide into. Duct Tape will be wrapped around the center of this smaller pipe to make it fit snug inside the larger pipe hilt. A hole will be drilled through the large pipe, small pipe, and blades. The Socket Head Thumbscrews will be inserted through the hole on one side and screw into the Tee nut on the other side. This will keep the blades attached to the hilt, and the notch in the inner pipe will keep both blades at the same angle relative to each other.

The pvc reducing caps will just provide detail to the hilt, and the plastic fins will need to be cut and attached to this endcaps somehow. Lastly, grip material (whatever that may be) and the metallic detailing (made from the For Sale sign) will need to be attached. Also, of course, all parts will need to be painted in various metallic colors, primarily gold with maybe copper, bronze, or silver highlights)

The blades will of course need to be cut to resemble Crimson Empire blades (the comic artwork varies greatly, so you may chose to use smaller more realistic sized blades like the action figure, or huge (wide) jumbo blades like the comic covers). The end of the blade will need to be made thin enough to slide into the pvc pipe and the endcaps.
Warren Jacobsen - TR-5932
I am the who when you call -- who's there?
I am the wind blowing through your hair.

Here are examples of the PVC endcaps for the hilt, as well as the "thumbscrews" (aka Socket Head Cap Screws), and pronged Tee Nuts. Note the prongs point inward. These may need to be filed or sawed off, or additional holes drilled for them. Round Tee nuts with no prongs are available as well, but Torso Boy chose the pronged ones because they added detail and design. Examples of glaive detail from the comics. Note details such as:

Optional circuitry on the blades. Here√Ę‚ā¨‚ĄĘs a rough blueprint showing how things go together. Here are links to my glaive progress. Click on "Detail" to view titles and commentary for all the photos. I will post an actual tutorial when I am done...but using the rough tutorial and my photo notes, yo can follow along.

Latest progress as of yesterday: attached the grip to the PVC pipe, added circuitry to the blade. Hopefully today is warmer and less windy so I can continue with priming and painting. circuitry
Warren Jacobsen - TR-5932
I am the who when you call -- who's there?
I am the wind blowing through your hair. The glaive is finished.

I've updated the link with a some more progress photos. In costume photos will have to wait until All-Con next weekend. Then I will start working on a step-by-step photo tutorial....using the images already available for everyone to see.

sheaths to house blades in
Warren Jacobsen - TR-5932
I am the who when you call -- who's there?
I am the wind blowing through your hair. 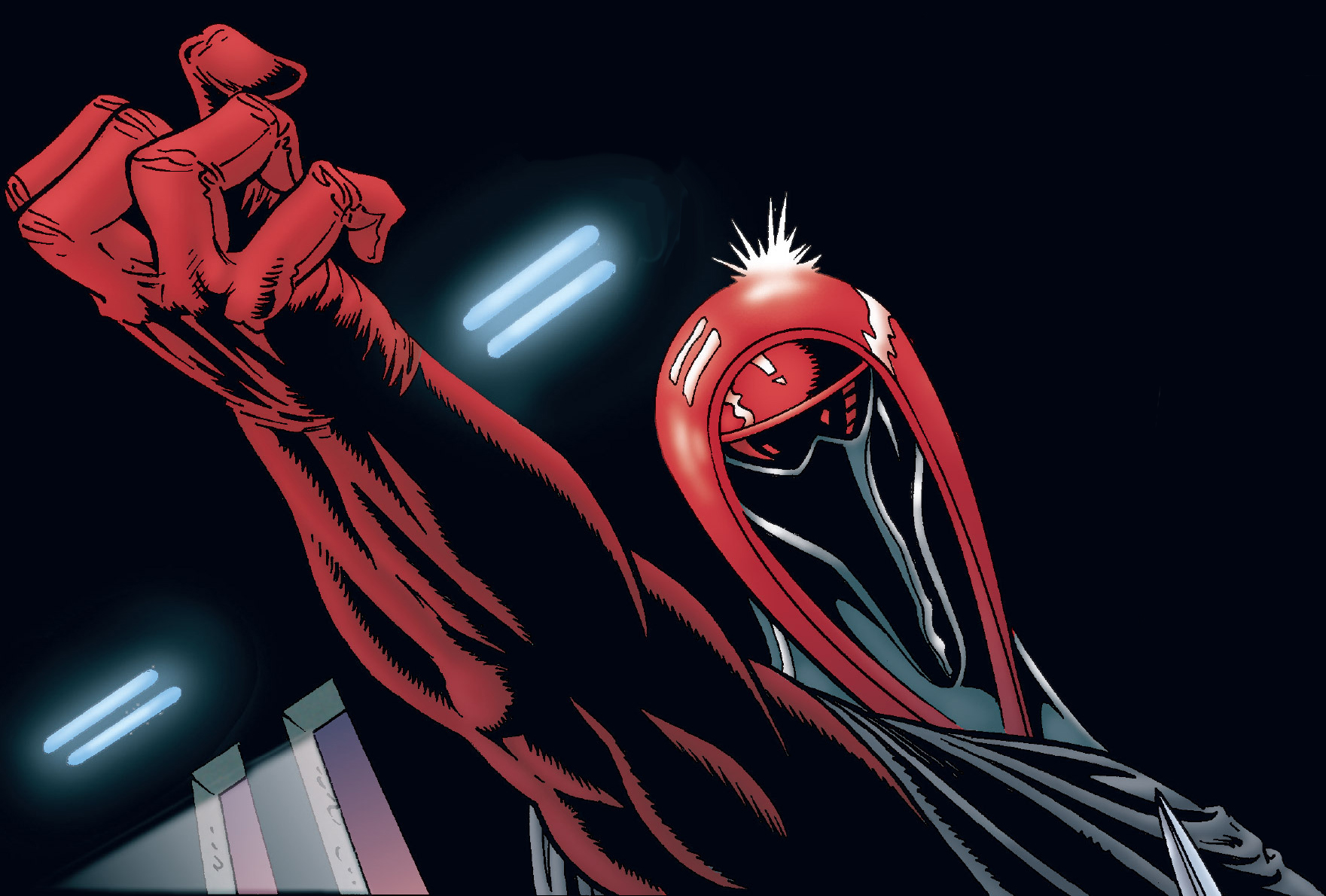 "An Imperial Guard never seeks special privileges. Ever. His entire goal in life is to serve the Emperor, and the New Order he created. His goal in life, and his desire in death." - Major Tierce
Top

Thanks guys. I think the tutorial will be pretty useful to everyone once it's done. While some of the parts I used are either "found items" or no longer available (the grip material), the basic formula can be customized to anyone's needs. The blades can be made out of other materials....the grip can be whatever you choose, and the hilt size can be bigger in diameter if desired.....not to mention hilt-to-blade ratio (long/short) can be adjusted.
Warren Jacobsen - TR-5932
I am the who when you call -- who's there?
I am the wind blowing through your hair.